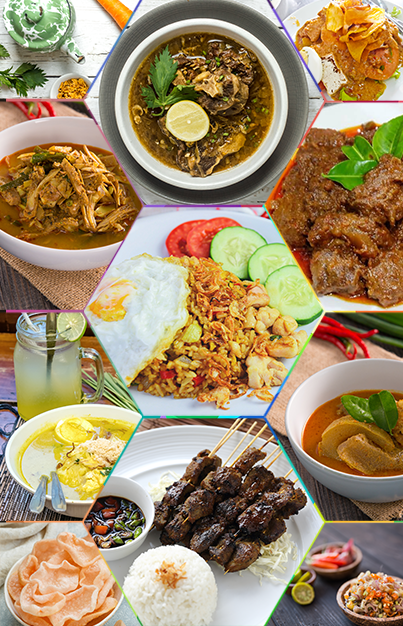 Indonesian cuisine consists of a collection from various regional culinary tradition. There are a wide variety of recipes and cuisines due to the existence of more than 1340 ethnic groups which spread out all over in 17,508 islands. Geographically, Indonesia, known as the spice islands, had been a trade route that is located in the crossroad between two continents and two oceans. Thus, its cuisine had been influenced by India, China, the Middle East and Europe.
Currently, from more than 3000 identified cuisine, the Ministry of Tourism and Creative Economy has announced 5 (five) national food namely soto, sate, nasi goreng, rendang, and gado-gado.
This national food can be found in many versions across the country. Satay, for example, has at least 20 different recipes adopted in different regions, depending on the local taste and availability of ingredients. For example, the Balinese satay lilit uses fish, coconut shreded, coconut milk and lemongrass. On the other hand, satay from Padang is drenched in a curry-like sauce typical to Padang cuisine.

Rice is a staple food in the Indonesian diet. Aside from rice, some cultures in Indonesia have other staple foods such as cassava, sweet potatoes, corn and sago.

Indonesia is also known as the fabled ‘Spice Islands’ which had been sought by the European nations since the 16th century. Until to day, Indonesia remains one of the world’s richest producers of spices, such as nutmeg, clove, galangal, white pepper, coriander, star anise, cardamom, candle nuts, cinnamon, vanilla, turmeric, ginger, curry leave, cumin and others. These native spices are mostly used as ingredients of the Indonesian cuisine.

Mostly of Indonesian dishes are complemented with sambal (spicy condiment) and/or krupuk (crackers) as condiments. There are dozens of sambal recipes and varieties of krupuk. Some popular sambal recipes include the Balinese sambal matah uses fresh chilli, lemongrass, and lime; sambal terasi uses shrimp paste and chilli; and sambal kacang, which uses peanuts and chilli.

Traditional Indonesian snacks called jajan pasar, refers to numerous kind of snacks or treats. These snacks are usually sold in traditional markets (pasar). Mostly, jajan pasar consists of cakes, puddings, desserts, and beverages which are home made with traditional recipes. Variations of jajan pasar are based on the geographical nature or cultural assimilation process that occurred in respective regions.

Communal dining in Indonesia derives from a very strong tradition. Many Indonesian meals are served as communal dishes during traditional ceremonies, rituals, or gatherings. It represents unity, solidarity, brotherhood, and hospitality among the family and communities.

Visit locals.sk to find out more